Who Knew Captain Hook Could Be So...HOT?

“Put your hand right here,” he orders and she willingly complies.  His lips twitch with a ghost of a smile but his eyes darken, regarding her with lascivious intent as he cuffs her wrist.  “Good Girl.”
Sound like a Scene from “Fifty Shades of Grey”? Not quite. In this case the domineering bad boy in question is not Christian Grey.  It’s Captain Hook. Yes, that Captain Hook - as in Neverland, the Lost Boys, and Tinkerbell – although this version, a.k.a Killian Jones,  looks nothing like the animated pirate you grew up with. No, this Captain Hook is witty, charming, and oh so sexy. And did I mention he wears black leather pants? 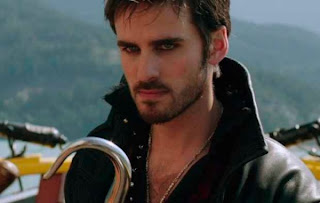 Fans of ABC’s “Once Upon A Time”, the fairy tale mash up that became last season’s top-rated new drama, shouldn’t be surprised by this new and improved Captain Hook.  After all, a revisionist approach to well-known classics is nothing new on a show that revealed Little Red Riding Hood to also be a werewolf. These bold plot twists involving some of fiction’s most familiar characters, while definitely a gamble, have clearly paid off as ratings for “Once” continue to climb.
So what is this “magic” that keeps viewers coming back for more?  Without a doubt, countless television executives are asking their market researchers the exact same question. The answer  might just be as simple as hope. In this day and age of crime shows and ill behaved reality TV “stars”, it’s refreshing to see a show with unending optimism.  Heck, even the evil villains are motivated by love and their own desires to live “happily ever after”.  So thank you ABC, for giving us a show about true love’s triumph over evil curses. It’s just what we need to start our week.
Of course the hot pirate in the black leather pants doesn’t hurt either.
Like what you see? Stick around. Click “Join this Site” and sign in with Google or Twitter


Already a fan of “Once Upon A Time”? Follow @br_myers  and her blog for weekly updates.
Posted by Ann Marie Walker at 9:00 PM 6 comments: